9AM, a rainy Saturday, the first weekend of February. Where would you want to be? I’m sure there are some great answers out there. But guess where I was: in Venice. I was just back from a trip to Northern Norway and the first thought that crossed my mind at 4AM, when the alarm rang, was: What the hell am I doing again? But wanderlust is a serious disorder so at 7 o’clock in the morning I was already flying to Venice, to live the madness of the Carnival once again. It was the second weekend of the event and 4 of my friends were already there.

It was the rainiest of days! 5 euro spend on a too small and too fragile umbrella, the moment I got off the bus, in the middle of Piazzale Roma and the rain, seemed the best business that could have been made that day, at the corner of the street. Wasn’t so, cause the wind was messing up with my investment and my new and useless umbrella was doing anything but protecting me from any rain drops. Mostly was making me crazy! And so, in the pouring rain, with a closed umbrella newly added to my baggage, I was crossing the large bridge build with ground-glass, leaving behind the ordinary real world  to enter Venice, a place that looks and feels as if a piece of the past have survived the present. And once I got right there, on top of the arch bridge, among the passers by moving on fast forward, the wind and rain teasing my face, I pressed Pause and stopped. It was too beautiful. The city was now revealing itself: so many bridges, paved small streets by the canals, the colourful buildings, the boats and of course the iconic wooden pillars raising up from the water. And I whispered for myself: Hello Venice, told you I’m coming back…

Rain seemed a minor challenge compared to finding the hotel. This was an endurance test since Venice is indeed a labyrinth. And since Google Maps choose the best moment to have errors of locating me, all I could count on was my poor space orientation. After crossing 6 bridges, walking in circle and saying a few curses, I reached the destination.

One hour later I was outside the hotel, on the large street heading to the centre, to San Marco.  I took a deep breath of the cold humid air. The rain had stopped but the streets were still almost empty. How scary rain can be! I was starving so I entered the first bar with the green TripAdvisor sticker on the door, dreaming of a delicious Italian focaccia. Inside, two asian ladies were busy serving at the bar. I thought maybe this was not a good sign but I didn’t want to be rude and leave. And so, politeness served me the worst possible sandwich: fast-food bun, mozzarella, lettuce full of water and tasteless tomatoes. But no way a sandwich could spoil my mood. And all I could wish for was to wander the streets, all of them. Hearing that my friends were busy buying Italian leather bags on sale, I couldn’t be more happy. So I could enjoy the city by myself. A bliss!

With every minute the streets were more and more crowded, people were coming out from everywhere, like mushrooms after the rain. I was walking straight on. The large street with tiny restaurants and stores on each side was now too small as the human wave was heading to Rialto Bridge and San Marco. Among the crowd, I started seeing the first people wearing carnival costumes, either couples or small groups of friends. Each time I couldn’t help myself to stop and admire. The noise was growing, bringing together talks and laughs. And so, without realising, I entered the Carnival’s atmosphere and I indulge myself in its magic.

Tight streets looking like secret corridors were escaping from the large street of which, all of us, strangers, were now part of. I managed to creep suddenly to the right, don’t even know why I did it. After a few meters of walking through the small space left between two buildings, in almost dark, I got to the canal and into day light. A wonderful 180′ view opened in front of me, just for me, as I stood there alone, for minutes, on the wooden bateau bridge. Boats were passing by the colourful buildings with beautiful windows, offering a postcard view of Venice. And there was silence.

I was heading to Rialto Bridge when something amazing just happened: out of the grey cloudy skies, the sun came out suddenly. I quickly went up the stairs of the bridge, among the crowd, running to get to see this view before the sun disappears again. And WOW, was indescribable! The view of the Grand Canal with all those gorgeous colourful venetian palaces, the black elegant gondolas floating slowly back and forth, the small restaurants by the water, the wooden pillars raising out of the water, the seagulls flying high and on top of all, the sun sending rays of light through a small window of clear sky in the clouds. It was sunset, one to admire and to remember.

As I was getting closer to San Marco, the streets were more and more grouped, smaller and smaller. I wandered each one I liked, letting myself guided by wanderlust only. Of course I got lost and of course I loved it. I crossed more than 20 bridges and walked even more paved streets. Getting lost on the small streets of old Venice, stepping from one to another and than another until you start recognising places, is the only way to really feel this unique place. There were people in costumes, wearing masks, everywhere you looked. Counts and countesses, dukes and duchesses, in velvet or silk, with lace and embroidery, with silver white tall wigs or large hats with big feathers, jewels and opulence. Masks were sold everywhere, in traditional ateliers or on market stalls, thousands of models, from 5 euro to hundreds. 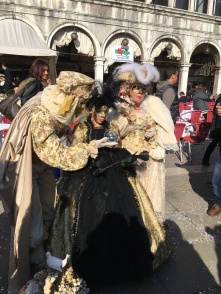 This was not 2018 anymore. We were back in time a few hundreds of years before. If there’s a place where you can travel through time, that’s Venice during the carnival. And San Marco was the stage of the event, where all the magic characters of the carnival gathered to be seen, admired, complimented and taken pictures with. There was no other place I wanted to be.

Later, when my feet couldn’t take it anymore, I met my dear noisy friends in a restaurant close to San Marco and presented them with great pride the hand crafted black colombina mask I have bought from a traditional atelier, Zago & Molin. We all left the restaurant wearing our masks, ready for a Saturday night in Venice during the Carnival and many reasons to come back again.