Where else can you wake up in one country, have breakfast in another and dine in a third one, without having to hop in a plane?! My beloved Europe…

We set off at daybreak, while Dubrovnik was still sleepy. Rain heavy clouds were delaying the morning, announcing what vacationers fear the most during summer holidays: a rainy day.

We were a large group of people from everywhere with a too talkative guide for that early hour. And it was raining, having me wander how this birthday will develop. In spite of the wether forecast and the sky confirmations I had a 10 years old tradition to keep: every birthday spent in a new place.

Perast – the town by the lake

Rain must have taken a breakfast break by the time we reached Perast. 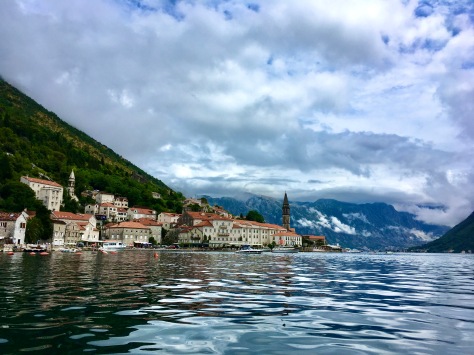 The small town appeared like a beautiful surprise, surrounded by mountains partially hidden behind low misty clouds, mirroring its old facades and high tower in the calm lake. Small drops were still playing naughty as I first step on the sidewalk, by the lake. My first impression, as I walked away from the people to take a look, was that, there, in Perast, the melancholy of old times meets gracefully the peace of small villages built by a lake, where the freshness of mornings lasts till dusk. Perast was in that morning, at the end of July, a quiet retreat from the mad crowds of tourists. We were the first to cross the lake in small boats, towards the small island in the middle of the lake, called Our Lady of the Rocks, known by locals as Gospa od Skrpjela. A placed build by bulwark of rocks and sinked old ships loaded with rocks and raised from the waters of the lake by a legend. More then 5 centuries ago, in 1452, when two brothers, both fishermen, were coming back home and found an icon of the Virgin with Christ on the sea-cliff in the middle of the lake. They took it from the water and bought it home. Next morning, the icon was no where to be found. By wonder, it appeared again, on the same sea-cliff, so the brothers took it home this time too. The same unexplainable happened – the icon disappeared and reappeared on the sea-cliff. And so people of Perast understood this was s sign from above and started throwing rocks in the water until a small islet was formed where they built a small church dedicated to the found icon of the Virgin, the patron saint of seafarers and fishermen. And what can be better then a beautiful legend in a beautiful place… 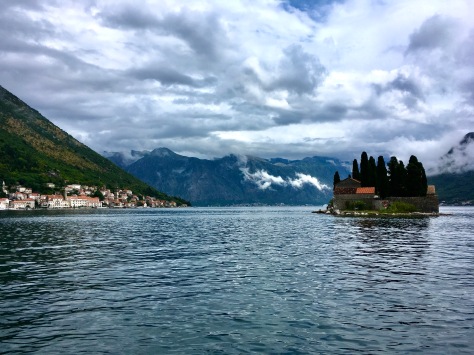 The views from the island were idilic, with the small Perast and the mountains now cleared by a few rays of sun. The rain was gone for now.

The road to Kotor offered amazing views. Montenegro was so gifted! The bay started contouring its shape, among mountains and small towns where tinny beaches were hidden like secrets known by locals only. It was raining again cats and dogs and everything you don’t wish in a day with plans like I did: seeing one of the most photographed places in Europe.

The first think I saw once I arrived in Kotor was… a cruise ship, a floating town that seemed as tall as the mountains around. Anyone knows that this means crowds occupying all the tinny streets of a small town. Even though the access of these ships is been highly restricted by authorities in Kotor, the tsunami of tourists descending from such an enormous ship at once is a huge challenge. I was so relieved I wasn’t a drop of that tsunami. I will never be, my idea of sailing and seeing beautiful places is the opposite of all that a cruise ship can offer.

In a day where every 30 minutes we had a pouring shower, I was already doing exercises opening and closing my umbrella. Such a useless object during the heavy rains.

We got a break from the rain in front of the Sea Gate, one of the 3 entrances in the old town of Kotor. The other two are River Gate and South Gate. The visit started with a nice to have tour of the main attractions inside Stari Grad (Old City) of Kotor and a local guide shared a few informations about the town that dates back to the Roman times, being first mentioned in 168 BC.  The Main Square (Trg od Oružja) of Stari Grad was the first we found, the moment we entered the gate. With an impressive Clock Tower guarding the place since 1602, this was the beginning of a trip back in time. If you’ll close your eyes for a sec, open them again after and try to ignore the way people are dressed, you’ll be right there, hundreds of years ago, wandering the already old streets of the town by the bay.

The tour with the guide was over so I was free to wander the town. A charming maze of cobbled streets opens from many points inside the Main Square and takes the wanderer to the Cathedral of Saint Tryphon (Kotor Cathedral), to the Bazaar, passing by old little churches, houses, shops. You’ll smile when you’ll get totally lost inside this labyrinth, cause for sure you will, and you’ll find, just by chance, the Cats Museum. Or a small passage that looks so picture perfect. 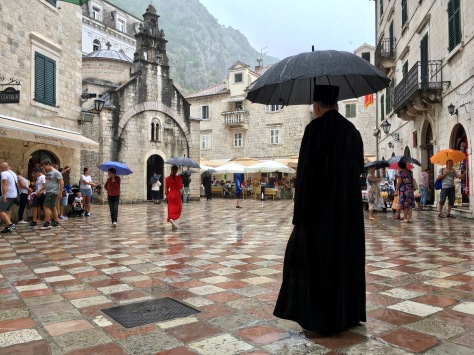 The rain started again, right the moment when I was leaving the cathedral. So I stopped on its stairs for a well enjoyed episode of people watching. Minutes were passing and the rain has turned into a serious storm: wind gusts, heavy drops, curtains or rain, thunders and dark clouds. I wouldn’t mind it so much down there, but I had plans: the best view of Kotor can only be seen from the top, on the mountain behind the city, climbing the way up to Kotor Fortress. I was checking the time every 3 minutes, and the sky every 2 minutes, looking for a bright spot that could signal that the rain will soon stop. Nothing… and the minutes were pouring like rain drops. One hour was left before we had to leave Kotor, for good. I needed about one hour to go all the way up and then down and find the Sea Gate. The square in front of the cathedral was deserted, all the people have vanished, hidden from the rain. 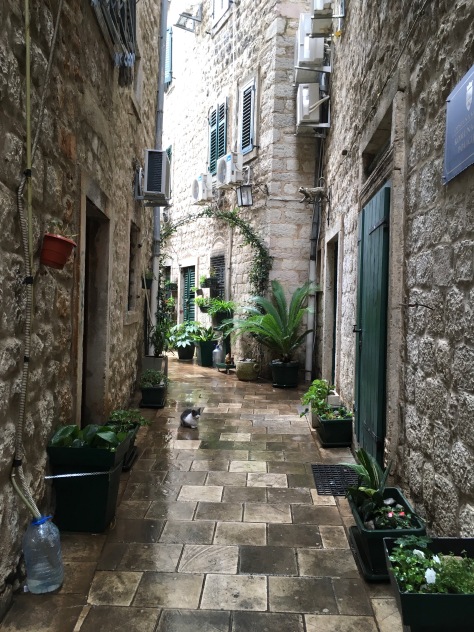 It’s now or never, I thought when I had the impression the drops were becoming lighter. The rain has emptied the streets, keeping people inside, but also turned the old cobbled pavement into a true rink where every step was a change to slip and fall.

I took a ran on the empty streets, asking for directions twice from a few shops owners. I found the gate, payed the fee while the man there was surprised to see someone would adventure there while it was still raining.

I used the narrow steps made of stones and build next to the wall, the only way I could walk there in my flip flops. I thought to go barefoot but I was afraid I could cut myself. Happily I meet only 3-4 people descending and I could keep using the steps. The slippery wide slope next to the steps was a no way, a guaranteed fall.

The last drops of rain have left the clouds whiter and the sky as now spreading a fresh light. Slowly the terracotta roofs became visible, a few more steps the bay started to grow, offering amazing views. It was a struggle to go all the way up on those slippery stones, wearing flip-flops, but I got there, at the Church of Our Lady of Remedy. It’s half the distance to the Fortress but I was more then pleased. The iconic views of the Bay of Kotor developed in front of me, with mountains, heavy clouds, the Adriatic Sea, now like a silver bay contrasting the shades of the roofs. So Instagrammable perfect! I took my time to take all that view in, enjoy it to its every detail. Three people only were there besides myself. We owned the panorama. of the bay.

Then I said a prayer hoping I won’t break my legs on the way down and started the ordeal once again, grabbing the slippery stones of the wall and trying hard to keep my balance every time I met other people that wanted to go up using the same tinny slippery stairs. Thank God, I arrived back safe, with nothing broken, just a few scratches on my hand, probably from the wall and a slight muscles pain from the effort. But my memories were worth it!

Seeing the tens of people that were waiting in line to pay for the access ticket at the entrance was a relief. The rain had stopped so the crowds were now pouring again.

Passing by local tinny shops with treats like olives, dried figs, raspberry or blackberry wines or the famous rakija, the local distilled fruit liquor next to fish, prosciutto or many other cured meats and of course the mouth watering selection of by absolute temptation – cheese. I realised I was starving. I gave up to a slice of pizza and as if the the pizza boy knew everything, I got a huge slice covered in plenty of delicious cheese. A treat that made possible one last walk on the little streets of old Kotor, where thousands of tourists were now testing their balance on the slippery stones of the pavement.

– Did you manage to… oh nooo, you did it! But it was still raining…

My smile was saying everything about my walk above Kotor, the one I was asking about since the very first hours of that morning. I showed my photos to the group. The majority of people were discouraged by the rain and sane enough not to take that risk. But I got to see the view. I got to see Kotor. A place I want to come back, in a sunny day.

Next: Dubai and Abu Dhabi