I followed the arrows. Small chairs with high backrest were arranged against the wall in a round room with wooden walls, a wooden writing desk with a reading lamp on, a few opened letters and many boxes of presents on my right, on a small door made of wooden boards also was written Baby reindeer daycare. I continued through a dark tunnel, crossed a small bridge built over what seemed to be a small frozen lake. I think I saw a big sled. Bells were ringing slowly and joyfully reminding of Christmas, its spirit was here, in spite of what the calendar was showing: end of January. Magic was in the air… A round door opened right in front of me, to a room full of colors. I couldn’t see more. A petite person show herself behind the opening door. She had green clothes and a tall green and red hat. I saw her ears, big and sharp. She was an elf! With a large happy smile and a big welcoming gesture of her hand she whispered quickly:

– Come, come in, Santa is waiting for you!

The fantastic sunset on top of Levi hill, next to Santa’s Secret Cabin may have been breathtaking, spellbinding and overwhelmingly astonishing, but it was starting to be so crisp cold outside. A little bit of breeze made it even dreamy. Excitement can’t keep warm endlessly, I was shivering and felt I will freeze down there if I don’t start immediately my way back to the top. The way back was a joke, so easy compared to the the drama and circus to get down there before. I took many last looks as I left, I couldn’t help it.

I took the gondola on my way down to the city. While descending I half unzipped my coat and noticed the border was frozen on the inside. Yeah, that’s what I call cold, I was freezing on the inside now. Happily the headache in the morning was gone. Might have been due to the difference of temperature the day before. 5h outside at -20C, the best cure. For another 4 euro the bus took me back to the centre, and again to the Tourist Information Centre. The same girl from that morning was so enchanted when I shared with her the adventures of my day and described her the phenomenal snow dogs I saw on top.

– It’s very rare to see that, you know, you were lucky.

Yes I was and I knew it. A day before I heard for the first time about snow dogs and a day after I witnessed this wonder with my own eyes.

I was asking too much from an already amazing day but I tried  my chances and asked if the evening tour we talked in the morning, for the northern lights, was finally decided. She blew all my hopes saying it was canceled, chances were low, due to the weather.

It was around 4PM and almost dark. It was too beautiful outside and I was too excited to be in Levi to go back to the apartment and stay indoor to warm up, though I needed that. I took a short walk to the lake, to enjoy the beautiful blue hour light reflected on the complete white around. 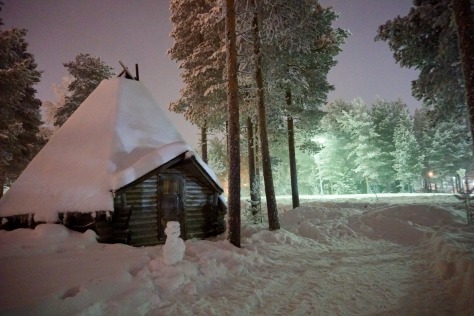 The lake was turned into a vast white surface as it was completely covered with snow and surrounded by high pine trees and a few houses with red or yellow walls and white porch in front. A sublime landscape, but I was too frozen to walk any more metters and my fingers couldn’t take any more photo. And above all these, I was starving. I saw K5 hotel near, like an oasis of warm and wellbeing. I knew about it from the internet. After a whole day spent outside at -20C, this was my heaven. Simple, warm and cosy: a dim light inside and low volume music, lit candles on each table and a fireplace spreading a comforting mood while outside, in that cold, my beloved white sugar trees, a straight line of high white pines were tempting me from the large igloo like wall made all of glass, to come out again. Not so fast… After 3 hot teas and a hot pumpkin soup I felt alive again.

While I was coming back from the lake I passed by a Lapish tent with a big bonfire place in front, with round wooden seats covered with reindeer skins. It was a Saami restaurant with a super tempting traditional Lapland menu. Was still closed then but the dinner was starting in one hour, and anyone interested could attend based on reservations made inside the 5K hotel reception.

I wasn’t decided what to do, to spent or not 60 euro on a dinner. I finally took my decision 10 minutes before dinner started, was, of course, to go.

The armchair by the fireplace was now vacant so I sit there. I was trying to do a Instagram worthy photo of my white snow boots next to the fire when I heard loud drums beats and the notes of a yoik. These are songs interpreted by the Saami people, the nomad population in the far Northern regions. I got to know their amazing culture last year in Norway. Their simple way of living in a perfect harmony with nature, their legends, food and songs: yoik, are fascinated. In the old times they were burned alive, believed to practice witchcraft when heard singing like this. A man dressed in traditional red Saami clothing came in the lobby singing, inviting us to follow him to the restaurant in the tent and so to start a Saami evening. We all followed. Inside the restaurant, built deep in the ground, was dark and warm and felt sort of homy. A big fire in the middle, who’s flames were reaching high, cracking and spreading smoke and a scent of cooked salmon. A few big pieces of fish were lined up around the fire, to fry. Walls made of wooden pillars, with reindeer skins and horns hanged upon, small wooden tables and chairs covered with reindeer skins.

They started bringing the food and we started filling our plates. And then again. I had the best dinner! From reindeer hearts and tongues to ribs, stew and steak, barbecued salmon with herbs, wild mushrooms, cranberry sauce and sweet mashed potatoes with butter. It all ended epicly with a warm desert made of some sort of sweet cheese and milky warm sauce. After two turns around to the pans placed by the fire, I couldn’t move nor breath nor blink. I was full and round now. This is what happens when you put a foodie in front of an opened buffet with home cooked traditional food. We then listed to stories and yoiks sang by the fire. It was a perfect time in the heart of white Lapland.

I said goodbye to my wonder called Levi with a last 2h walk in that winter wonderland, with white icy roads, puffy trees, white houses… white everything. One of those moments I would have wished to stay somehow trapped forever, as inside a time loop and with no regrets or memories of anything else but that. Just like the boy in The Snow Queen story, to keep on living there like in a crystal ball with a never ending fairytale like winter inside. Just us, winter and I, in a perpetuum cold and limitless beauty. It was the last night in Levi, a dream made true for which I feel too grateful.

But Rovaniemi was waiting! And Santa was there, and reindeers and huskies, ice glass igloos in white forests and a night spent at -30C, hunting for the northern lights.