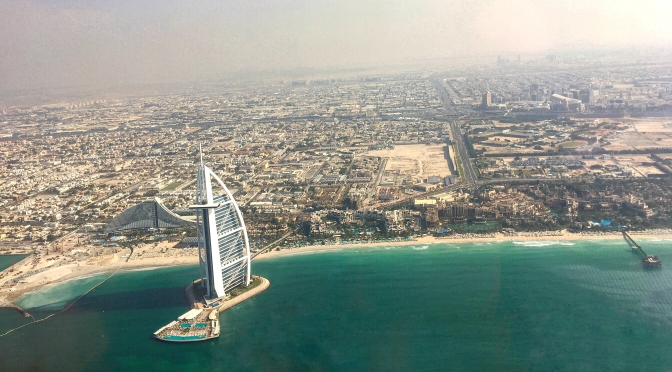 In a city that offers all that money can buy, it can be difficult to decide what you want and how to spent the most precious currency that exists: time. But I knew: my first helicopter ride. I will fly above Dubai. 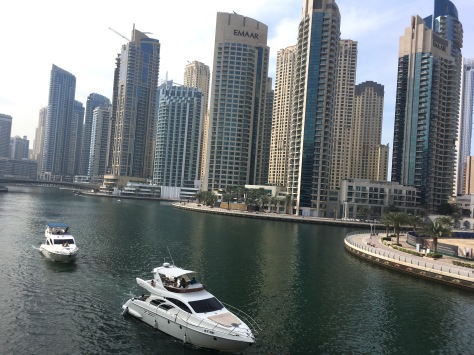 A breakfast with a view, Dubai Marina view. Not on a terrace, but a bridge. And not a real breakfast actually, but definitely one to remember. The day started like this, with dates milkshake and gazing at the grey curtain of skyscrapers mirroring their shapes in the silver waters where luxury white yachts slid up and down the Marina. Doing this cost me 30 minutes of my second day in Dubai.

The taxi dropped me in front of Dubai Police Academy, close to Jumeirah beach. A jeep was already for me at the gates, to drive me inside through the security zone. It looked like a highly protected area. I knew by the noise, minutes later, that we’ve reached the starting point: a white helicopter was just landing.

The preparation for the helicopter ride took about an hour, inside the centre, with a session of safety instructions and technical info, including how to get in and off the helicopter when it lands on land or water. After the theoretical part, waiting for my ride and watching other customers coming and going, I observed how the whole thing was happening. I’ve noticed there was also a second helicopter operating, a black one that landed later. That looked so cool, I instantly wished my ride will be with that one. There were 5 seats in a helicopter, so only one seat in front, near the pilot. A kind of VIP seat… No matter the colour of the helicopter, I thought, I just hoped I won’t be sitting on a middle seat…. Seeing people leaving and the expressions of thrilled they had when they were landing back was not just fun to watch, but also increasing my impatience.

Finally my turn came. Me and 3 other girls were forming the group. The white helicopter was on the helipad, waiting for the next group. We were waiting in line and I thought that one it’ll be ours… And then I heard the noise. The trees outside started moving. The black one was landing back and the white helicopter just took off. I heard someone from the security telling us to wait in line inside.

– You’re alone so you’ll be sitting in the front, he told me.

These were the words I wanted to hear after paying almost 200$ for a few minutes ride. I was so happy.

The next minute my hair was blowing all over my face as I approached the black and cool helicopter. I took my seat in the front with a smile reaching from one ear to the other, that got even bigger when I laid my eyes on the so very good looking pilot: dark haired, with a short beard, wearing a pilot uniform and a fab smile. 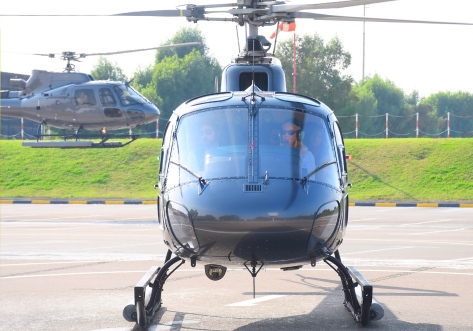 I got the headset on, receiving the last indications from the security stuff as they closed the door. I heard the noise increasing and felt the moment we took off, leaving the ground, going up and up until the cars got smaller and the highway above became a line beneath us. Seen from the sky, the distances didn’t seem so large and the map of Dubai started imprinting on my mind. The Palm and The Atlantis, Dubai Marina, then we turned right and headed towards downtown, where Burj Khalifa was guarding the city from its heart, the middle of the skyscrapers that look tinny compared to the 160 levels sharp structure. It was a clear day with great visibility for this mind-blowing desert city where this is a rare gift. 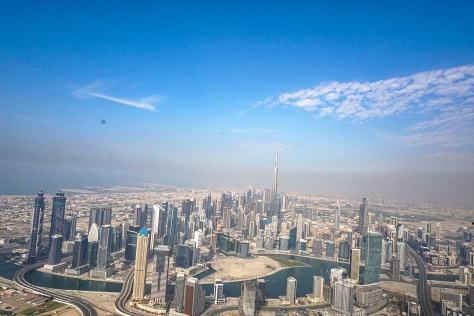 The views were spectacular. We were communicating through the headset and I was the one asking questions: how close can you get to the downtown and Burj Al Arab – not very unless you have a permit to land there, where was the famous Kite Beach. Then we turned back, flying along the coast line, Jumeirah beach, Kite Beach and then Burj Al Arab, half a circle around the 7th stars hotel passing a little over the legal limit of distance for helicopters that are not landing on its helipad. We saw again the huge The Palm, the man made complex of islands forming the shape of a palm tree, we saw The World, the artificial archipelago of 300 islands laid out in the Persian Golf in the shape of Earth’s continents. 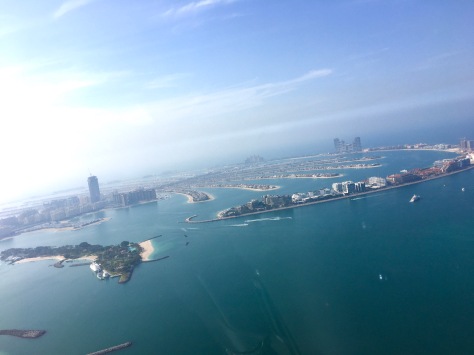 Two more breath takes and we were heading back, getting closer to the helipad, ready to land. I was thrilled! It was worth every scent and choosing Dubai for my first helicopter ride was a great idea for the unique landmarks.

At the end of the ride, as we step out the helicopter, a few cameras jumped in as if we got famous while up there in the air. Then I found out our memories came with a price. I took the cheapest version, 2 photos (only) for 50bucks. It wasn’t allowed to do any photo shooting around the helicopter but of course I got my selfie with the pilot up in the sky 😉 In Dubai, even memories come with a price.

Another taxi dropped me an hour later in front of Miracle Garden. I wandered among structures of all shapes, from a castle to a plane and cartoon characters, all made of flowers. With 28C, the garden smelled like summer, the January summer in the Golf. This place is another superlative of Dubai: the world’s largest natural flower garden, 72K square metres with over 50 million flowers and 250 million plants. 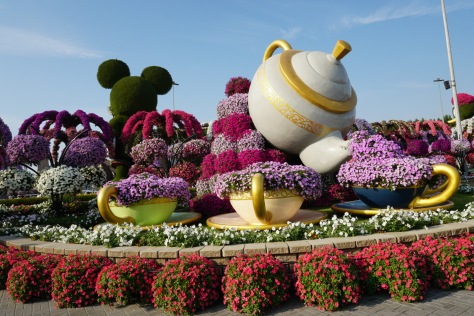 In the middle of the desert, open for visitors between November and March, before the burning summer temperatures start turning all into dust. My battle here was a classic one for single travellers: obtaining 2-3 decently framed photos that, as an exception, will include myself. An exception because I prefer the photos of beautiful places with no people in the picture, an achievement that in most places takes a lot of patience. But the biggest challenge when traveling alone is people’s natural gift for ruining a photo. Of course, many of my friends are too in this category but at least I can ask nicely for a new try and help with indications. With strangers, that would be rude…. I can talk a whole day about these funny yet annoying fails that happened to me, like for ex. the best panoramic pic of Dubrovnik where my feet were cut off or the one with the RIP Blue Window in Gozo, Malta, (now gone into the see) where the natural monument, the window, the reason of the photo, was cut in half… Still, I never give up and eventually I get the photo I want. And so I did in Miracle Garden, though people were swarming everywhere at that hour. 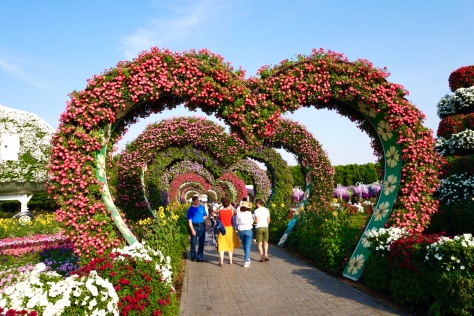 Evening: At the top

45 minutes of waiting for a bus that didn’t come change my plans for saving some budget using the public transport. I jumped in a taxi to get right in time in Dubai Mall, for my VIP entrance for At The Top of Burj Khalifa at 7pm. I got the ticket the day before, from an open office I saw in the mall, where people were waiting in line. I thought that must be the place. I almost had a heart attack when I heard the price: almost 100 euro. My credit card was in pain. Only long after I realised IT was a good deal, because most people go to see level 128. My crazy pricey ticket offered priority access and the chance to see Dubai from level no 148.

We were about 5 people in the line: two Russian women, beautiful and very branded, a French couple, both very tall and good looking, him looking more young. And myself, this time dressed for a helicopter ride + a drink in the highest lounge in the world, so nicely. On the other side, for normal tickets line, tens of people were waiting.  We entered through a separate door after they checked our passes, the stuff repeated the check later.  In a hall a long line of people were waiting. We passed by them and went further. It felt nice that VIP status. I very soon realised Burj Khalifa is not just a huge building of 160 floors, there are 160 levels of luxury and the most perfect finishes, the contractor save no penny when it came to materials and designs. It’s spotless from what I’ve seen this entire private property where the only access is through the mall, buying a ticket, or the main entrance if you have a reservation at one of the restaurants inside.

We took two elevators and in seconds we were at level 148. From the moment the doors opened, it is jaw dropping. The lounge is small but cosy, with scattered light, candles and orchid as decorations. The closed balcony that surrounds the place offers views that makes you feel you’re on top of the world. 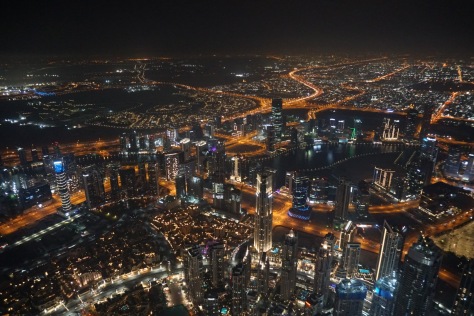 It was getting dark and I think it was the best moment, to see as the blue hour turns into night into millions of lights from the skyscrapers beneath and the multitude of highways and boulevards. What a city, indeed! I had to admit, I was impressed. An ambition made reality but with a good dose of good taste and elegance. I admired the views and I just couldn’t get enough. 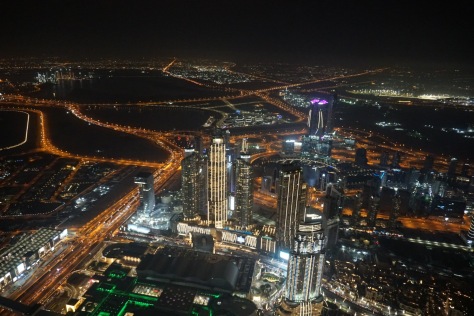 Level 128, crowded and closer to the earth seemed quite ordinary after I finally decided to leave level 148. I didn’t even wanna take many photos. The best part here was that the water fountain, the Dubai Fountain started the show of lights and music and seen from above it looked gorgeous.

Due to the large number of people, the place feels very touristy, compared to the laid back and spoiled mood from the previous level. A souvenir shop covers most of the place, where the price for a box of chocolate gives you ideas that it might be gold, leaving a little room for an interactive floor made of a screen with image of the city above that cracks under people’s feet as they step on it.

I felt overwhelmed enough and I wanted to leave. Hundreds were forming an endless line to the elevators. Oh God, I will sleep here tonight… I thought. But my 100 euro ticket saved me, the VIP guests had priority using another elevator, smaller and faster. Suddenly, adding this too, plus the whole experience, those 100 euro I payed for didn’t hurt any more. I’m glad that just by chance I made the best choice.

Dubai Fountain was playing the moment I got out the mall. With people filling every single place at the tables around, with waiters from the restaurants running with plates filled with dishes, with crowds gathered around Burj Khalifa lake, the music, the water jets up the sky, the night sky with the moon watching down to us. When the show of water and light stopped, the lake was completely covered with little lights, as a replica of the sky above.

The day was done, with every minute from morning till night spent so perfectly – Carpe Diem. A summer night mood was filling the city with its warm breeze. In this city of so many worlds where all that money could buy has been build, created and raised from the desert sand, I wished I had more… not money, but time.