My feet were burning! A hot long day of wandering got me exhausted. I touched the sea and felt it as if it was a step to heaven. Cold and calm. I entered knee deep with a Hmmm whispered to myself only. The sunset light melted the skyscrapers on Corniche Street into liquid gold, ready to ooze into the sea. It was my long expected moment. And then I heard in the back, someone was approaching:

– Excuse me, please step out of the sea. Is forbidden after 6pm. I’m sorry…the law…

A never-ending 3h night bus ride took me from Dubai to Abu Dhabi the night before. Finding a taxi driver that spoke good English, with no Indian accent, was the first big and good difference that happened in the second Emirates city I came to see: Abu Dhabi. He was from Uganda and my 3 Swahili words turned our conversation into a friendly one.

The second difference, a lavish one this time, was the 4 stars hotel by the sea in central Abu Dhabi I afforded. In Dubai that would have been a fantasy. Thanks to the late room service and the Indonesian restaurant downstairs I had chicken satay with peanut sauce and nasi goreng, Indonesian fried rice. What a dinner at 2am!

I overslept, damn it! Or my phone didn’t rang… Or maybe I ate too much to late…

I took a look at the hotel pool and fancy interiors and left. I lost more then an hour looking for an exchange office. After the posh Dubai, Abu Dhabi was just another city: large empty boulevards, a few fast food restaurants, shops with ugly dirty windows and an unbearable heat.

After sweeting 2l I finally jumped in a taxi and drove to the very reason of my visit there: Sheikh Zayed Grand Mosque, ranked by travellers in the last 2 years as the world’s second favourite landmark, according to TripAdvisor, after Angkor Wat in Cambodia. (about that one soon). A place I found about from Instagram….

After a 30min drive the white minarets of the Grand Mosque started to be visible and soon was clear why it is called Grand, cause it’s huge!

No entrance fee, all man and women were split in groups to the changing rooms. I wanted a burgundy abayas, a robe, those looked prettier, but I got a light brown one instead. Only two colours available to rent, for free as well. The garment had a hood so you can cover your head, which is mandatory inside. The rule is simple: no visible ankles or head. If anyone wants to wear her own clothes, no problem, as long as that rule is applied.

I then joined the row of hundreds of people going in, passing by the other hundreds getting out. When I stepped out into the light and all became suddenly bright white around, I know I have arrived to another beautiful place I so much wanted to see: Sheikh Zayed Grand Mosque was sublime! 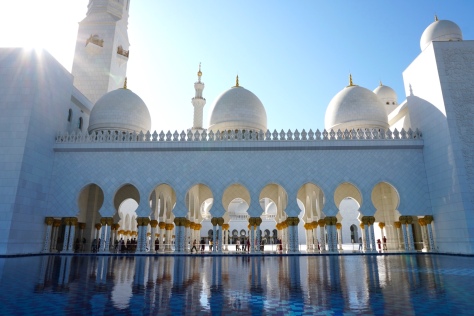 The strong sun shining right above and the perfect blue sky made the whole place look like an Arabian Nights white palace. The details were gorgeous. 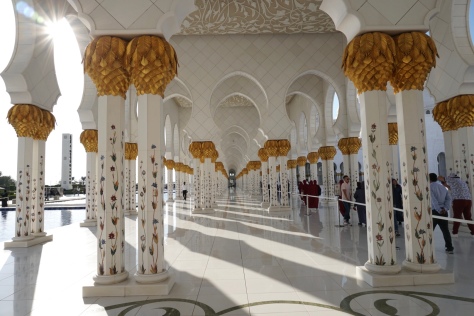 The interior yard was surrounded by a no crossing tape so that no one could pass over the limit, on the mosaic forming large flowers spreading all over the white yard. There were special spots where photos could be taken, so photographers, instagrammers, likes addicts and others have all the conditions they needed for the perfect shot and the best memory.

Well that for a change was a struggle to me: I was alone. And I only wanted one nice photo of myself with the mosque large yard in the back. If possible no minaret getting straight out of my head. Simple? Nop! It took me an hour to get it and 7 people who tried. In vain. I got either an ID type photo, either one without my feet, one without my forehead, of course the one where a minaret coming straight out of my head, a few with my eyes closed and many on the move… I felt discouraged after all the options I could think of for how to ruin a photo ran out. I thank everyone for their (usually) one photo taken. The 3pm free tour was lost. I stood in a corner and admire the place. It was too beautiful to care about a photo. The photo opportunity spot I was sitting got empty, when a Japanese couple came. He had a camera. I thought I should ask him nicely for a photo, like I did previously with other 3 people carrying good cameras…. He accepted smiling. That’s a good start, some people look interrupted… I found my place. He made a two steps more in the back. Hmm…another good sign, not a close up photo this time, huh! He gave me back my camera and they leave before I could check the result. I never do this on the spot, my reactions can hurt feelings.

I catch them up in a few minutes, among the crowds.

– You take great photos, thank you so much. I love it.

– Yes he does indeed, isn’t it, his wife confirmed smiling. 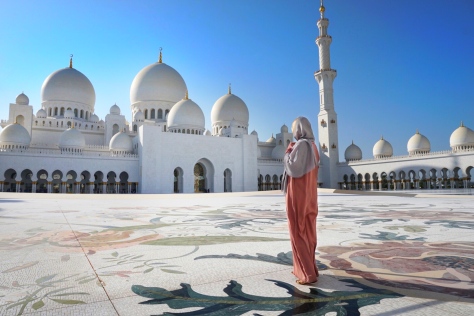 He was one of those rare begins born with a natural gift for framing a photo. We changed a few words and they told me about another free tour starting in 30 minutes and what they saw during the previous one where they can enter inside the mosque.

It was getting late and after a wandered around a little bit more, I decided to follow the crowds and see the interior of the mosque without a tour inside. 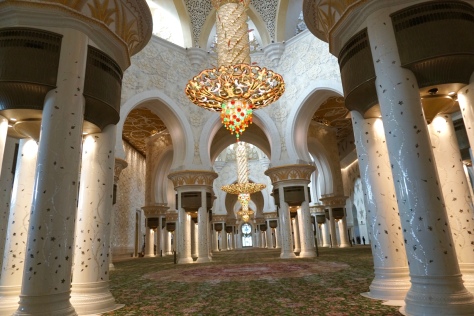 The interior was just as dreamy as the white yard, with the biggest chandeliers I ever saw.  After all, 545M $ for 22K square meters, about 4 football fields, do look fabulous, inside and outside!

It looked like this beautiful! I almost destroyed my Havaiannas flip-flops rushing on the endless boardwalk, from Al Ain Palace all the way up to Corniche Beach, 5,2km in less then 30min. Passing by passers by, runners, playing kids, The Lake Park, and then Abu Dhabi Beach.

When my feet were hurting me close to an unbearable level, I arrived.  I crossed the beach, threw by flip flops on the sand and stop when I reached the see. What a feeling! It was too cold for a swim and too empty but perfect to cool away a hot long day. The beach at sunset looked fantastic, surrounded by glass skyscrapers on one side and the silver sea on the other, quiet like a hot day in the desert. I was happy there, all I had was all I needed. I didn’t even noticed the guardian:

– Excuse me, please step out of the sea. Is forbidden after 6pm. I’m sorry…the law…

So I found out in Abu Dhabi you can’t swim at sunset. That’s why there was no one in the water. The sea was cold anyway. I sit on the sand and admire the place and enjoy my peace and excitement: I finally was in Abu Dhabi.

I left the beach when was already dark. I took a taxi and asked him for a good restaurant with local food. I almost wanted to kiss him 10 minutes later when I saw in front of my eyes 3 big letters: GAD. My favourite place to eat in Hurghada, Egypt was in Abu Dhabi too. I ate until I couldn’t breath any more and talked about Egypt with the waiter there.

I walked on Sheyk Zayed Bin Sultan Street that evening, happy I added a new country to by beautiful collection and more new beautiful places. That evening of January, with 28C temperatures, the streets were filled with people, the restaurants, the terraces, the bars, the coffee shops… The heart of the city was beating. The big world was there and I was part of it, me and my wanderlust, ready for my next flight. How I will miss that feeling of perfect freedom later this year.

PS: lesson learned – always check the check in conditions when I book a room inside the airport. I didn’t that time and it cost me tones of stress, 100 euro lost for another room, outside the airport and almost my connection flight for back home.

Next: one day in Istanbul