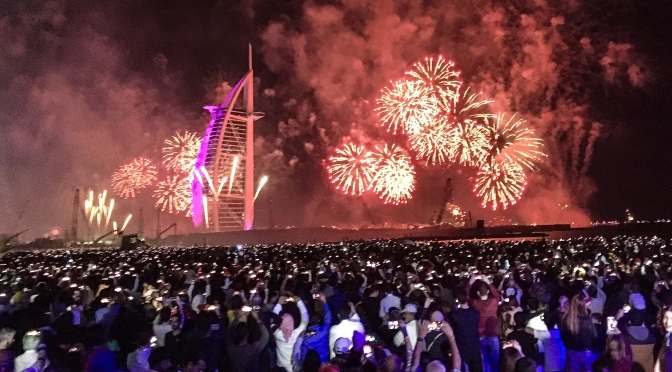 The great journey of 2019 has arrived to its last steps. A year that turned many of my bucket list wishes into great memories: 13 countries, 9 for the first time, 2 visits in my beloved Paris, my first African safari. 32 flights above the clouds. My all time record year as a wanderer was beyond expectations. And the last 45 minutes of 2019 didn’t disappoint as well: in a taxi, running on Sheikh Zayed Road, the 14 lanes highway, leaving behind Burj Khalifa, the tallest building in the world and heading to Burj Al Arab, known as world’s only 7 stars hotel. I was excited, in Dubai. The very place where I wanted to be. The silhouette of the famous hotel was puncturing the dark horizon like an arrow.

As we got closer, I was too charmed by the white architecture of Burj Al Arab to observe we were driving now in a sea of people, all heading to Jumeirah Beach. The last 20 minutes of 2019: I decided to become a drop in that see of people dressed in white that will finally led me to another dream come true: New Years Eve fireworks in Dubai.

The rush from the hours before, when I landed in Dubai that evening, got me starving and thirsty. A few Indian samosas sold at a stall on the beach saved the night and a mango ice cream added the summer mood in December: it was my hottest NYE: 25C. 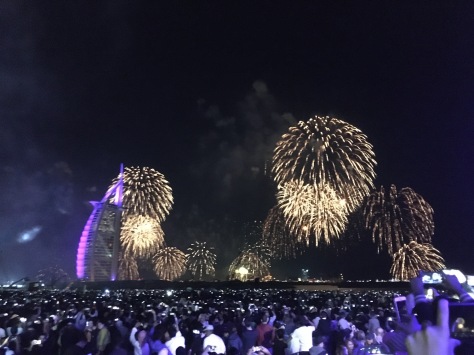 The fireworks were as promised: opulent, breathtaking and… long. Dubai, baby! A riot of colours surrounded Burj Khalifa, in the back but still visible from that distance, joined by the ones at The Atlantis, in the front, on the sea and in the middle, Burj Al Arab, right in front of me, became an explosion of lights and colours. The fireworks turned the sky into a paint contouring shapes of hearts and planets like Saturn. And down to Earth, for more then 10 minutes, thousands of heads were beating unanimously towards the sky and hands holding phones were turning the moment into memories and posts for family and friends. The last minutes of the show turned the night into day. A day of colours, sang the thousands with a loud whisper: Awww…. And this is how the first 10′ of 2020 had passed, vibrating of light and joy.

As the sky became dark and silent again, that massive crowd instantly broke into pieces that had spread everywhere in just minutes. Indian families with 10-12 members were continuing their NYE picnic on the grass in the park near by. A group of men were now opening bottles of champagne. Others were sending NYE wishes on the phone. Toddlers were suddenly too tired to walk. The party on the beach was over. After the Emirati people, the Indian families were coming second in therms of numbers. The rest, Europeans, Americans just a few of them, many single.

It was too nice to waste the night and just take a taxi and go to sleep at the hotel. I wanted a long walk on the seafront. The beach was hidden by darkness but even though I felt the sea was there, so close, blowing its warm breeze towards the busy road. I checked Google Maps and it looked encouraging, I thought that at the end of one hour walk I will get close to my hotel maybe. Poor me!

An hour later, the cars and the people became more and more rare. It was even better, I thought. Beautiful white villas with large balconies and tall gates covered in Bougainvillea flowers were so quiet. Some tourists at a crossroads were trying to get one of the taxis that now were very rare.

30 minutes later I checked again Google Maps. It wasn’t my poor signal’s fault then: after 1h and a half it looked as if I walked for 10 minutes. I decided to walk towards the closest metro station. Close on the map… In reality, after another 45 minutes I ended up on an empty street where only a few Indian people were heading God knows where. I could see the suspended metro line, which seemed a good sign. But when I reached a complicated passage with no sidewalk I realised Dubai was not a city made for walking. On the contrary, it was made for cars.

I had no idea where I was and it was too far to get back from where I came. I asked a few guys, Indian as well, for directions. One of them explained, very polite and nice. Then he wanted to take a photo with me. Burj Khalifa’s silhouette was contouring in the front, probably very far away considering its height of 800m. At one point I became exhausted, walking like running by some sort of factory, the kind of area where no one walks ever even during midday. And I was thinking at my grandmother’s superstition: “What you do on NYE, you’ll do the whole year.” For me that would mean walk till you drop and get lost.

At one point in the front I saw the first signs that I was somehow getting close to the downtown and walkable areas. And people. And as sent from heavens, I saw a taxi, I raised a desperate hand and he stopped. I was saved! Thank God!

So I’ve learned, the hard way, my first lesson about Dubai. It’s not a walkable city. The distances are a killer!

The next episode of my fancy NYE in Dubai was one hour being trapped on the great 14 lanes highway, Sheikh Zayed Road, the road that crosses Dubai from one end to its other, as long as the coast takes you. That was really smth: 14 lines of absolute and stand still traffic jam. “What you do on NYE, you’ll do the whole year….” was the mantra that kept playing in my head, accompanied by the cries of my taxi driver who was cursing the madness of that night, swearing that he won’t ever work for another NYE and concluding:

The second miracle that night happened just out of the dark. The car started to move and just minutes after I was getting close to my hotel, in . I felt like home!

At almost 5am I entered one of the restaurants opened, the one with the largest terrace. I had a great welcome. I needed a fish to secure my luck in the new year.

– Is it fresh? I asked inside, where I was invited to choose the fish that was going to become by early dinner.

The long minutes of wait and a confusion (I asked for a salad and I received a bowl of veggies and yoghurt) let to a fabulous meal: the fish was spicy, as asked, fresh, crunchy and it worked perfectly with my mistake salad.

At 6:30am my night was done and my day was beginning with a deep long sleep. I had to get back my forces to see for myself what was all the fuss about Dubai, so far the city that wasn’t made for walking.

Next: best of Dubai

2 thoughts on “Dubai – New Years Eve on the beach”