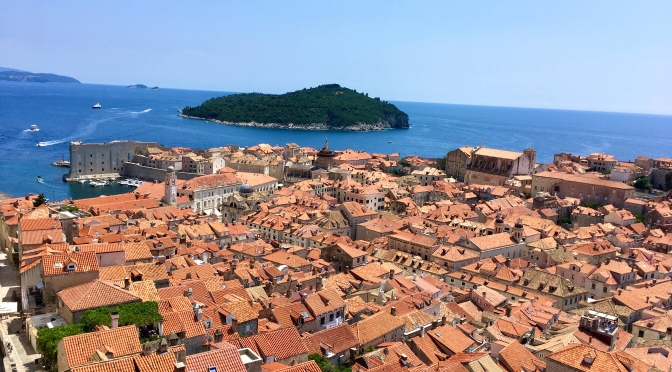 Can’t be a better time to remember my rainiest summer holiday than a rainy evening of May. If now I’m happy for the forests surrounding my hometown, the fields with tall grass and all that’s green and alive is finally enjoying rain after a dry spring, I wasn’t so happy that day, arriving in Dubrovnik on a ferocious storm……

I felt lucky when I found tickets for the buss departing in 10 minutes from Split, heading to Dubrovnik. It was going to rain heavily, the dark clouds and winds weren’t joking, and the first heavy drops started hitting the window next to my seat very soon. The rain continued the whole trip, in violent episodes, as we passed through Bosnia Herzegovina and back to Croatia, and finally reaching Dubrovnik. A light rain, a afar away thunder and a sky that seemed to get brighter. I was optimistic those were the last drops and I can walk to my not so far accommodation with my clothes dry. But little do I know about rain… In a few minutes the drops became more frequent, the sky got darker and the wind was blowing the rain towards us, under the bus station roof. Should I take a taxi? But was very close…. I saw a little pub across the street which seemed a good refuge. By the time I’ll have lunch, rain will stop. But little do I know about rain… All I could do was sneaking under the roof of a tinny newspapers kiosk that was on my way. And that was it! A curtain of water started falling down, violent and determined to cover all in water. Lightnings, thunders and strong guts followed by darkness. The afternoon became evening under the black clouds. In a few minutes all got flooded, the street I had to cross to reach that pub and the pub also. So no more lunch! No more refugee. I was stuck under the tinny roof in the middle of a storm. I decided to buy an umbrella from the lady only to hold it in front of me under that shower. People were running, cars were swimming and soon nothing moved but the rain and wind. I was now sharing the tinny roof with other 4 people. We exchanged empathy smiles. After 30 minutes the rain calmed down but the whole place was a lake. A car drove by and we all watch the driver to see if he’s gonna have the same faith as the one before him with a X5 BMW with German numbers and now a dead engine. His car survived but we all had to hold our suitcases up from the waves of water coming from the street. After another 30 minutes of waiting and watching the terrible effects of the storm, I finally find a safer zone to walk away, hoping there’s no canal opened under the ankle deep water.  And so I was welcomed to Dubrovnik!

– How come a girl like you is not married?

After climbing up and down a few tens of steps, when I finally got out of the flooded area and I was misdirected by the only person I meet, I was finally found by my host looking all drenched, this time form the effort not the rain. And there I was, in their living room. My hosts were two nice seniors renting 2 rooms of their apartment to support their pension income. Nice and curious like people who have reached a certain age. The homemade sweet cherry soften my tongue and I answered simply:

– I haven’t met my perfect match.

Classic. But I got support immediately.

– She doesn’t trust men these days, continues her grandfather.

I even got pancakes with homemade quince jam so I was opened to any question now that the storm was forgotten, the sun was up and my foodie spirit was spoilt.

The 1st best moment in Dubrovnik was opening the window of my room. The area where  my accommodation was was built on a hill. I was at 9th floor. The blue sky, the clear fresh light after the storm and the panoramic view of the city by the sea was a gift.

It took a 30 minutes walk to the old city of Dubrovnik, a distance that I was going to hate the next days and regret Split and the perfect location I had there. Dubrovnik is pricey and I thought I did a good deal. Only thought…

Finally I was in front of the drawbridge to the Old Town, via Pile Gate! Packed with tourists. Once I crossed it, Dubrovnik, the so photographed and talked about one, began. Placa, or Stradun, the main street, appears like a straight and wide limestone channel beneath grand ancient houses. 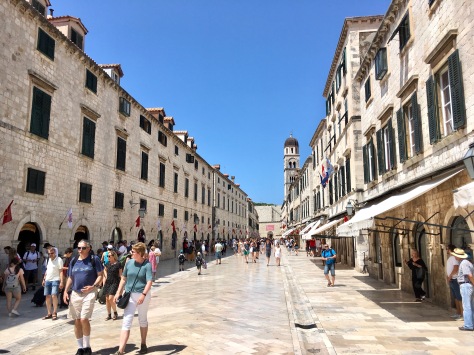 The glistening limestone pavement walked with thousands of visitors each day connects two of the gates to the citadel, Pile Gate and Polce Gate. With small restaurants or shops on each side, it is a sudden prelude to what seems to be a different world, an ancient one where seeing a knight at the corner won’t seem here out of place. Like in Venice, one you cross the bridge, the wonder world begins. The Rector’s Palace, Sponza Palace, the Cathedral, Church of Saint Blaise, Clock Tower, the Large Onofrio’s Fountain and the little limestone streets offering teasing sights to the terracotta roofs and the long stairs passages hidden in the shade, behind the bright facades in Placa.

I like it and all I wanted to was wander. And so I meet the see, the cobalt blue Adriatic, still rough after the storm earlier that day. Next to St John Fortress strong waves were exploding in thousands as they hit the massive walls build in the 16th century.

I called it a day with a glass of Dalmatia white wine and a local treat: black rice, enjoyed at Dalmatino restaurant in the old town, where I was lucky to get a table, outside, on the busy little street. Dubrovnik was more alive now, under the stars, in a beautiful summer night.

My plan for that bright clear sky morning was a walk on the citadel walls. A perfect start for a day in Dubrovnik. The old town is surrounded by a wall so thick that on top of it there’s a narrow cobbled alley, a 2km long walk that offers the best views of the old town.

A fresh morning, just before the sun starts to burn is the best moment for this. The sea of square shaped terracotta roofs, hundreds of them, meet the Adriatic blue where Lokrum island is the only green spot.

It’s an Instagrammable picture perfect view, one among many others: The Placa, the baseball stadium, the Large Onofrio’s Fountain. King’s Landing, the capital of the Seven Kingdoms viewed from the height of it walls and after from its little streets kept me busy all day with long walks interrupted by ice-cream short breaks in places like the Franciscan Monastery where one of the oldest pharmacy in the world still exists since 1300.

A swim on Banje beach cooled down the day and my nerves. After a failed attempt to find a restaurant with local food, that was placed high on Mount Srd, an adventure that took me way far from all the mainstream spots frequented by tourists, trespassing a few private properties, I ended up going down again on the same killer steps that took away every drop of energy. At least I got to see more of Dubrovnik, the less accessible part, including bird’s eye views towards the bay. And as usual, I tried to get to know a place in my own way. 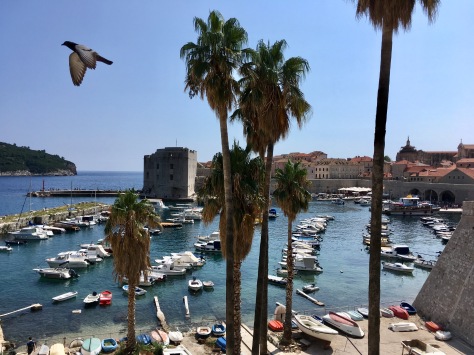 The golden hour turned the limestone old town into a golden citadel, where the rush inside the restaurants kitchens matched perfectly the one on its busy streets. And so the evenings begin.

Close to the Large Onofrio’s Fountain, next to the stairs of the Franciscan monastery lies one of the living legends of the citadel: the Maskeron, a 20cm wide weird gargoyle head coming out of the wall like a tinny step. It’s easy to miss it, unless there are people gathered around. It is said that those who manage to stay on top of it, keeping the balance while also take off their shirt, will be lucky in love. Therefore, encouraged by the myth, boys, girls, even adults were testing their balance with more fun then success. The performances were attracting passers by from the street and each time someone was getting close to fulfilling the challenge, applauds and encouragements were filling the night. The kind of night that  I already knew will turn into an amazing memory of one of my beautiful places, finally discovered:  the old and charming Dubrovnik.

2 thoughts on “Croatia: Legends and charm of Dubrovnik”