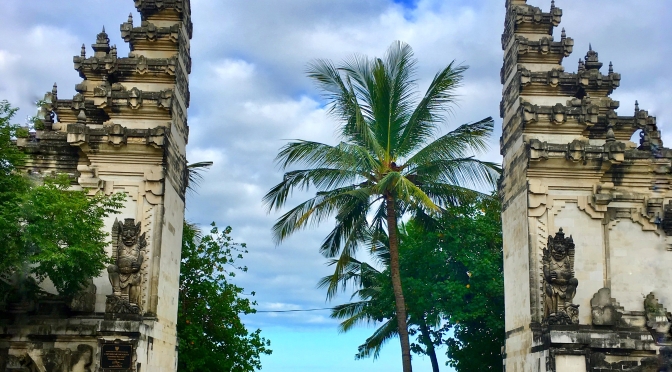 Jungle on the left, jungle on the right, myself in the middle, somewhere. With my hair flying in the wind, I was running on a scooter drove by a local on a dusty bumpy road. Banana trees with large leafs, some taking a bow and offering heavy green bananas, others, more proud, only red banana flowers, all were guarding the road. It was indescribably green. And wild and untamed. Every single time another scooter or car was passing by, magic was happening: we all became invisible in a thick cloud of dust. No one cared!

– Could you take me after to Manta Point? the scooter driver nod his head. Must have been the 5th time I was telling him this in the last 30 minutes, since we left the jetty.

Some dreams are old, other new. Mine was just two days ago born and was already taking me to a famous place, called Manta Point, where Andrew has told me the other days, in Mabul island in Malaysia, how he experienced something out of this world: swimming with the manta rays. September is a perfect time, he added. So there I was, dreaming eyes wide open that day, on another island: Nusa Penida.

It was evening when I landed in Denpasar, the airport in Bali. Carrying my yellow padded backpack and scratching the allergy on my arm, which I was now officially calling “The revenge of the zebra prawns in Malaysia”, because, of course, of how I got it.

First thing I did arriving in Bali was searching through trash bin, in the airport. This is what emptying your pockets in the wrong moment brings you. My huge suitcase was the only one not showing up. I realised it just after I had decluttered my pockets, throwing away everything, including my ticket with the evidence that I had a luggage. I’ve managed to find it in the trash, ignoring some curious looks and soon after I was reunited with my belongings.

– How much? I needed to get to Kuta

– To Kuta? 20$ The lady answering was organising the taxi drivers waiting in front of the airport exit.

– That’s too much, it’s not even 4km… I left pretending I didn’t hear her asking how much I want to pay.

– Will you drive me to Kuta? I said to a young men I meet a few meters after, following the universal wisdom: the younger, the cheaper.

And so, with 10$ I got in front of my guesthouse in 20 minutes and I also booked a trip for the next day. I knew prices in Bali are cheap but I had no idea what Bali cheap means. I was going to learn it, the hard way, in the next 24h.

– See ya in the morning, at 7am. The taxi driver left, leaving me with my smiling hosts, in the lobby build outside, in the yard. I was welcomed in a beautiful garden with warm smiles and the famous Balinese greetings, joined by a bow. I was starting to feel excited: I was in Bali. A boy showed me my room which was actually an apartment. Huge! The bathroom was the size of my bedroom back home. Ant the price? 5 damn $! I felt as if discovering that Paradise exists.

I was hungry and it was getting late so I left my stuff and I rushed out to check the surroundings in that place named Kuta… and grab some food. I kept repeating one mantra to myself: watch your gourmand mouth, stay away of the Bali belly, getting sick while alone here is bad, bad, bad.

Bali belly is just as famous and terrible as the Delhi belly in New Delhi.  It keeps you in the bed or should I rather say: on the toilet, for a few days. The rules are simple: only bottled water, even when brushing your teeth, no peeled fruits from markets, no fresh anything, and God forbid, no street food! That’s the devil. Meanwhile I kept hearing in my head my Aussie friend, Ilana, telling me a few months before, while we were tracking in Petra: “Don’t worry, you’ll get the Bali belly, everyone does, we all did, but you’ll be fine, cmon, you’ll enjoy Bali”…

I was so determined to play it safe. Until the first street food stalls I met around the corner. They also had green coconut so who could resist??? It’s been 24h already since my last green coconut in Mabul. I got fried rice and shrimps, thinking that street food might be ok since is well cooked on fire. The lady was way over nice to serve me since they were closing the place. She stopped from what she was doing to take my order and then ask the cook, a guy next to her, to make one last fired rice for me. It was good, quite delicious, but I was eating and thinking how bad it will be if I will spend the next days in bed… vomiting and trying in vain to live outside the toilet.  I was quite frightened of this perspective and stopped eating after a few bites.

– Finished? the lady asked me?

– I am soo full, yes, was super good, thank you… I was so lying considering that I ordered it saying I was starving. And the idea I was wasting food, which I almost never do, made me feel so bad.

She brought me a spoon to use it for the soft interior of the coconut, that white soft part which is so delicious in green coconuts. I was alone, sitting on the margin of a long metal table with white plastic chairs. The surrounding street-food stalls around, decorated with tens of photos of dishes that they serve, were closing also, washing dishes, throwing garbage, preparing the next day.

Even if I knew I shouldn’t judge Bali by the impression Kuta leaves, I couldn’t stop thinking: what’s all that? A short walk after my frugal dinner, on the main street, didn’t help me change that poor impression. With the beach on one side, big but too dark to see much though the impressive Balinese gate at the entrance, hidden after behind a 2m concrete wall and the pubs on the other side, passing by Hard Rock caffe and a few night clubs, all these didn’t help me doubt my first and bad impression of Bali. Is this all? Can’t be! That high gate to the beach, the famous Kuta beach, that was the only one related so far to how I imagined Bali. And what I could see from the beach, the wide beach with high palm trees, was promising more.

I went to my room, took a cold shower, again (no hot water apparently) and fell into a deep dreamless sleep at the end of a long trip and the beginning of a fantastic new one.

To be continued: Nusa Penida and the famous sunset on Kuta beach