After a few hours of trekking in Taman Negara jungle, through lush greenery and sweating like never before in my life, due to that 90% killer humidity, we finally reached the Kuala Tahan Tembeling River. It was like I imagined, dreamy: the dense tropical rainforest, with high trees spreading their branches like tentacles and twisted lianas vines hanging down like green curtains, was split in two by the waters of the large river, of milk and chocolate colour. A man was waiting for us right there, on a few meters wide beach of white sand. We continued by boat, on the river who’s waters were warm like a soup, crossing tumultuous rapids, gazing at beautiful birds flying from one side to another or huge lizards on the shores, sending us curious looks. We arrived in an area where the river was running quiet, just like a lake. The trees brunches looked here like hands, each trying to reach the other side. 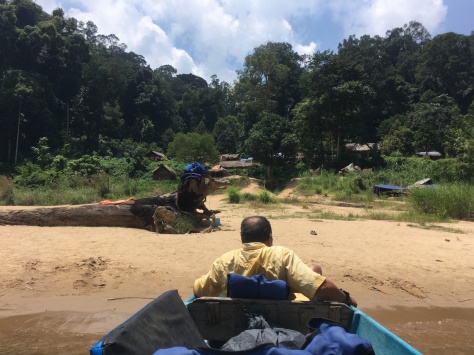 – You can take a swim if you want, says Abdullah, my guide and already my friend.

– To see what gets me first: a crocodile or some piranha? He laughs as we touch the shore on a small secluded beach with yellow sand, carried out there by that mighty river. For a second I thought I saw a naked boy disappearing behind the dense vegetation. Or maybe I did saw him. We were now on the territory of the Orang Asli tribe, heading straight to their village.

In Taman Negara there are two ethnics of Orang Asli – Batek and Semokberi. The life of these aborigines is very basic, nomadic style, but what amazes me the most is how knowledgeable they are about the jungle, their home, basically.

I look around on the river bank and smiled, thinking it looked just like a photo of the Amazon, wild and mysterious.

Abdullah continued his lessons about the fantastic plants growing in the jungle, he showed me one that closes its leaves every time it gets touched. I had fun for minutes teasing it, for his amusement. His love for nature is a mix of respect, humbleness and gratitude and the fact that got us close was exactly that he saw I share the same feelings.

We then follow a narrow path going up the hill, almost hidden behind large fern leaves. A few cottages covered with rags and dry palm tree leaves are raising out of the dense green. Were build, apparently, to offer shade. I can see now three old women sitting under. No walls, only the roof and I can barely see them from the distance. I noticed they are dressed very colourful, with sarongs tied around their slim bodies. 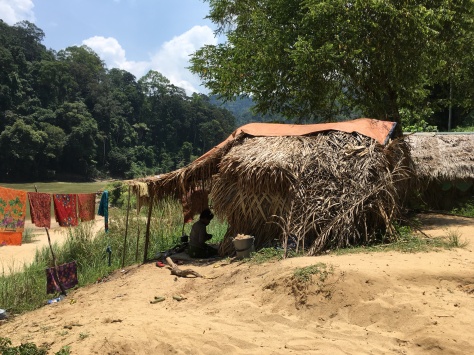 A few more steps further and we are now surrounded by more cottages, some of them having all 4 walls, all covered with palm tree dry leaves. The entire village is formed of not more than 10 homes. The Orang Asli, the original people, the oldest inhabitants of Malaysia live like this for thousands of years, in small isolated communities, just a few families in the heart of the jungle. They hunt in the old ways, with poisonous arrows blown through bamboo long pipes, making fire from dry pieces of woods, following their own rules and customs. They are protected, fed and educated by mother jungle and she is providing them with all they need. They fish, pick up fruits and hunt, and sometimes they plant corn or a few trees for fruits. Their impact on environment is almost 0. This way of living, away of all the benefits and madness of what we call the modern life, is so fascinating. From the Arctic and the Sami population to Asia and its aboriginal inhabitants, people still live like this. I can’t stop myself wonder: How come we got so far from this? Polluting all, over fishing the oceans, destroying and rubbing the nature of all its gifts, heading with fast speed to a future that looks grim and even incompatible with life.

Here time has stopped for good. A young woman wearing an orange sarong tight up from her solder to her knees takes a naked 3 years old boy and starts bathing him in a bucket, behind a bunch of fern bushes. She uses water only. Her dark skin looks so beautiful, like velvet, contrasting the light orange of her sarong. I see other two, very young, who are carrying their offsprings in baby k’tans.

Abdullah says they all merry very young and because they merry inside the community only, sometimes the children are born with health problems or major handicaps. If a woman marries a man from another community, she moves away, following her husband.

The modern world got them too in some ways. Now women are taken to hospitals to give birth, the Government is trying to keep the children in schools and to provide the tribe with clothes or food. And so, with plastic and precessed foods. In change, they accept visitors. It’s a compromise, having strangers to observe them and take photos of them in change of material advantages. Less hunting, less risks taken, easier life. I did restrain from taking photos and I tried to be as little invasive as I could. The only few images I took with me were taken without anyone’s notice.

We are soon greeted by a skinny man in shorts. He smiles with all his face. He’s got no teeth left but he’s proud to be a great hunter. He is ready to teach me to blow the pipe and I’m ready to learn. The arrow is like a 20cm needle made of bamboo with a round end polished with a dry leave that stands as sand paper. He starts by showing me how he makes the arrows, the technique is fantastic! Once the arrow is ready, the sharp end gets covered with poison. The wild target has no chance once it gets hit by this. 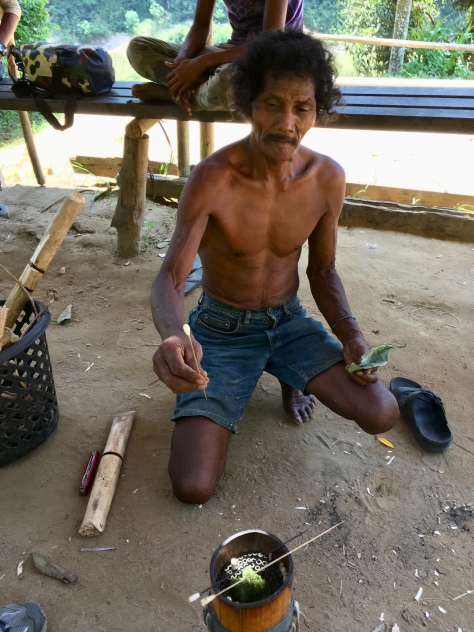 We use a Hello Kitty toy, pinned on a fence, as a target. I never like this character anyway so I enjoy it even more.

The pipe is more then 2m long, made of bamboo also. He does it 3 times and hits the target each time in the head. 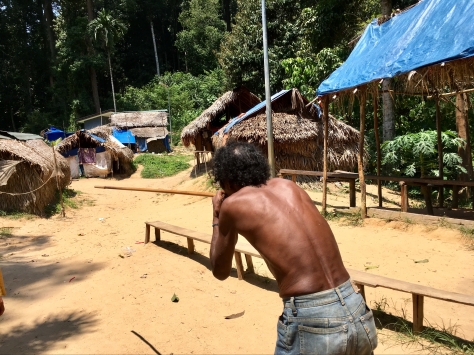 My turn now: 1st time I suck, second I get closer and 3rd I hit the Hello Kitty straight to the heart. But only after I got extra indications from the master. I hear applauses and we all laugh.

– Now you are a true jungle surviver! Abdullah said

– I should move here!

Fire lesson is next. A young boy takes a piece of dry wood and a rope. he starts rubbing the two parts and seconds after we see smoke. He continues with fast moves for a few more seconds, then puts the resulted ash in a bunch of dry grass. He blows and the smoke gets even more dense. Right after he has fire in his hands. My turn to applause now. 1min 20 seconds was all he needed to light the fire.

We head then to the last cottages of the village. A few children are playing outside and I am amazed how independent they are from such an early age. We sit there, among the people, on a bench improvised from two trees. The chief of the tribe comes, Abdullah salutes him and they start a long conversation while sharing cigarettes brought in by Abdullah. He also bought candies for children and he passes them to me so I can give them. They surround me smiling, with curious looks, grab the candies and run away. I saw them after heading to the river. They reach the small beach we came from and the next second they are all jumping in the water, naked, laughing and speaking loud. What a peaceful life and what a fantastic scene was developing right in front of my eyes. 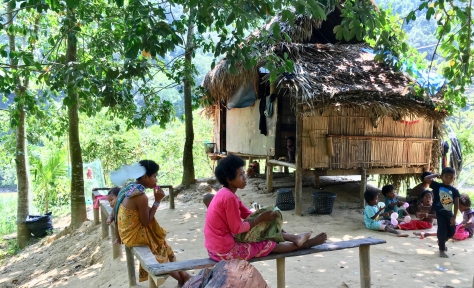 We got carried out and instead of spending here, with the tribe, one hour, we spent the whole afternoon, almost 4 hours. Indeed, time has different values here.

We went back to the jetty where Sun, the driver, was waiting for me. I said Abdullah good bye promising to come back one day to the green paradise of Taman Negara. We then drove back to Kuala Lumpur.

On the way back Sun made a few stops in small local markets to buy all sort of exotic fruits, like rambutan and langsat and different desserts, just to have me taste the delices of Malaysia. All was fantastic. He refused any money from me, his reward was seeing me getting in love head over hills with his country.

The day ended with a visit at Batu Caves where a hindu festival was under way. The steps going up to the caves were just painted in the rainbow colours on this occasion. A hindu ceremony was happening in the middle and huge colourful hindu gods were placed in front of a shrine decorated with thousands of flowers. Tens of men dressed in white sarongs were attending, singing, praying. Sun explained to me a little of the significance as he was a Hindu, original from India.

We got right in time at my hotel for a last swim in the fabulous infinity pool, on top of KL. What a city, what a country, what a day!

PS: I do kept in touch with Abdullah, send him photos from Europe or the places I’ve been after. Seeing the photos with winter in Finland, he said he would die there, in that cold. Every time he asks when I’m going back.