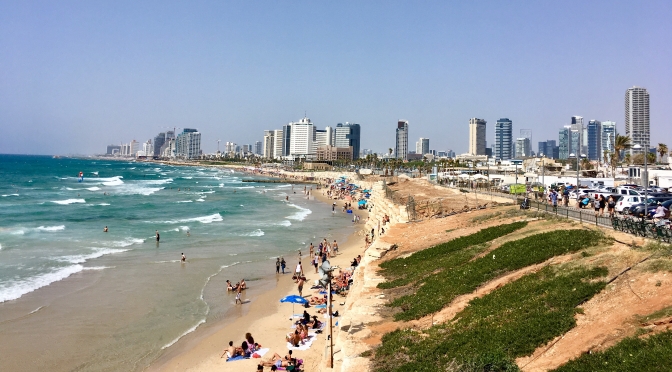 I was lying on a bunch of pillows and colorful carpets in a big Bedouin tent, made of only a few high wooden pools and a black rough membrane of camel hair. Our host was making the food for us: pita bread, prepared on a piece of wood, right there, on the ground and cooked on a large pan heated above the fire in front of us, served with labneh (goat yogurt) with olive oil, dry mint and green olives. I was drinking my mint tea while talking to the Thay blonde young woman about how it took her years to get her visa and be able to visit her boyfriend’s county, Israel. There I was, in Israel, at the shore of the Red Sea, a stone’s throw away from Jordan and Egypt.

It was the 10th day of my holiday in the Middle East, my back was all sunburned, the skin of my hands was never that dry, my clothes and I were dirty and smelling like camel but it was the purest freedom and happiness.  So…who says Mondays are no fun?

How I got there, with a big smile on my face and memories for a lifetime?

10 days go, on a hot Saturday morning, I arrived in Tel Aviv. I received my 3 months stay permit after a series of question that lasted for about 10 minutes at the passport control. It was the Sabat, almost no one was working and the only way to get to the city was by taxi. I knew taxi sharing was common here and when Boris, a russian israeli taxi driver approached me, all I needed was a couple to share the drive with. And so we were 3 on our way to the beach front area in Tel Aviv, for 50 bucks, a good deal. Boris was so talkative and had no problem in sharing intimate details about him and his wife, but the word he pronounced the most was “money”.

I was tired from the 1 hour night sleep, thirsty and hungry when I reached my AirBnb room. The apartment was shared with two really nice guys and its location was ideal, right there on the beach, in front of Ben Gurion iconic statue representing the first prime minister of Israel in swimwear, doing a handstand on Frishman Beach. Summer was already here in Israel, though it was only the end of May, it was a laid back August mood. The beach looked perfect, with clean turquoise water, soft sand and packed with people, all tanned and fit and cool, singing or skateboarding, speaking all the languages. The large boulevard by the sea was full of rainbow flags as the LGBT pride was to be held in a week or so. The tall buildings in glass facing the Mediterranean sea, with fancy hotels or business centers were completing the image of a present, cosmopolit, and alive city which I did not expect to be this amazing. 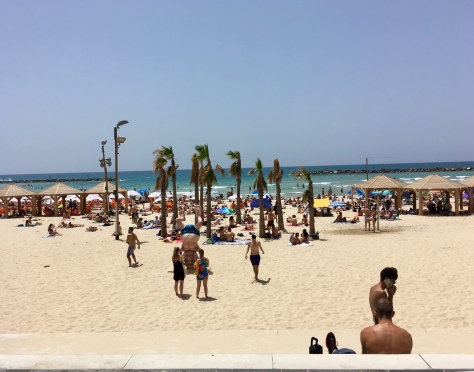 After a slice of cold watermelon, one of the best I ever had, I was ready to explore a new beautiful place.

I started walking the promenade towards old Jaffa, where a friend have told me about a restaurant where they serve you 20 types of mezze on the house. That is something a foodie can never miss.

Yafo in Hebrew or Yaffa in Arabic, the ancient port that has stories to tell about Solomon, Saint Peter, Andromeda and Perseus, was the place I first saw the two big cultures, the Jews and the Arabs, separating and mixing each other. The old buildings with dusty antiques shops where an old Jew was selling hundreds of big old silver rings on a silver plate and the small street food restaurants where muslim man were selling pita bread and humus and many more, all had names in both Hebrew and Arabic. Al-Bahr Mosque (Sea Mosque) and Mahmoudiya Mosque with their minarets reaching as high as Jaffa Clock Tower, built of limestone, as most of the buildings I was going to see and live in the next 10 days. I wandered the empty silent streets of old Jaffa in the afternoon heat. It smelled like good fresh food, spices and oriental perfumes, and the light  notes of a song in Hebrew, similar with Greek music, reached my ears. 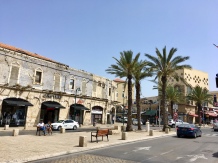 Hunger determined me to head to the port, a few minutes away, where I immediately notice The Old Man and The Sea terrace by the impressive number of plates on every table. And here I had an unforgettable food experience. As soon as I sit down, my table was covered with not less than 12 small plates of different starters, from humus, falafels, all sorts of salads, fried cauliflower + hot pita bread and freshly squeezed lemonade with mint. Again, this was on the house, for free, no money… Though this was more than enough, I had to order something and a big plate full of shrimps in garlic butter cream have joined the feast. It was more than I could eat but I did my best. It all ended with zalabyieh or lokma (deep fried dough soaked in syrup) and tea made of fresh mint. Incredibly tasty and on the house again. I thought I was in paradise.

After this feast was rolling towards Neve Tzedek, one of Tel Aviv oldest neighbourhoods, a fashionable area with avant-garde design stores, handicraft shops, trendy and stylish bistros, white small houses and most of all full of bougainvillea flowers which I simply adore. While you wander its quiet street, enjoying the shade of trees in blossom and playing with lazy cats that are everywhere, indulging yourself in a cozy small village like atmosphere, when you look back you are brought back to reality by the view of tall shiny skyscrapers that seem to touch the clear skies. 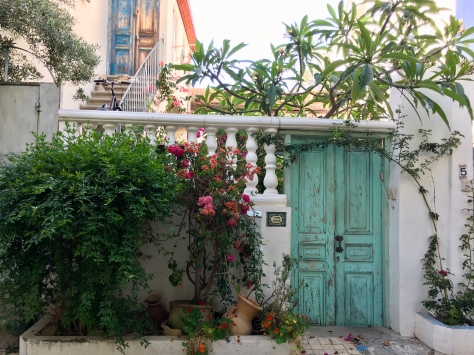 I was amazed by Jaffa, enchanted by Neve Tzedek, I was so satisfied after a gourmand fest, was wearing a new bracelet on my hand (I buy bracelets instead of magnets) and all I wanted more was to head to the beach for a swim. The water is perfect, I was told by Gal, my host and I thought we might just have different standards of appreciating water temperature, though I don’t mind cold water for a swim. I let my feet feel the sand for the first time this year and touch the waves of my beloved Med. It was close to sunset and Gal was so right, the water was more than perfect.

I ended a beautiful day on the beach in Tel Aviv, watching the sun hiding beneath the sea, feeling the warm salted breeze on my skin, with my feet hidden deep in the soft sand, not even realising how rapidly the city lights replaced the day. A couple of good conversations with locals about Israel and Palestine and how this place is now the safest on earth made me smile thinking of my friend how was here last year and told me the opposite.

The start of my journey couldn’t have been better and safer. And as soon as the sun was rising again I was to discover more, as I was heading the Dead Sea, Jerusalem and parts of Palestine.

To be continued… soon 🙂