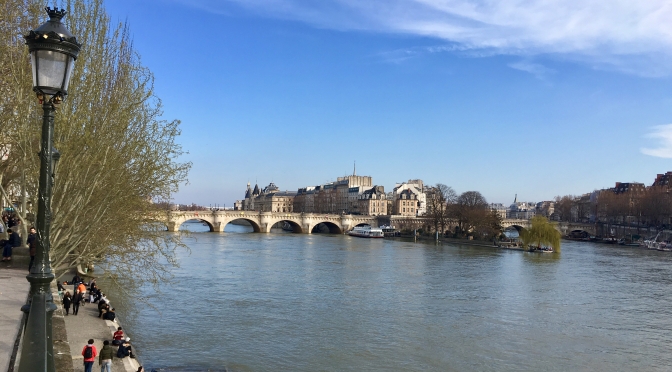 When you wake up on a Sunday morning and the second you open your eyes you realise  you’re in Paris, you know it’s not gonna be an ordinary boring Sunday. I jumped out of bed barefoot, pull back the curtains and opened the window from the small balcony of my room. I was at the top floor, in a 400 years old building and 200 years old hotel, on Rue Saint-Antoine, in Les Marais, two minutes away from Bastille. What a gorgeous spring sunny day it was! The rush in the street was the sign that a new day has started and I had to quickly become a part of it.

I had already in mind that this 5th visit in Paris to be a little different. I wanted to see the other face of my favourite city, not just the famous places I’m so found of, but the places where tourists and even Parisians don’t usually go for a Sunday walk. So after an amazing Saturday that has ended at 5am, I was determined to discover a few hidden gems in Paris.

The first destination was a street known as the most beautiful street in Paris; happily, it was quite close to where I was and I decided to walk. On my way, I stopped a little at Bastille Market, a flea market opened on Sundays and Thursdays, to wander a bit among the stalls full of regional products, fruits, vegetables, oysters and everything you might think of, and why not, have a cheap and nice breakfast there. The moment I laid my eyes on a stall full of tens of types of cheese, I knew I have met my breakfast: black truffles cheese. I left happy, eating small pieces of divine tasting cheese from a plastic bag.

In 15 minutes I found Rue Cremieux. If not the most beautiful, certainly the most colourful street in Paris. And the most “Instagramed” apparently. I took a few photos, of course… and played with a gorgeous Persian white fluffy cat, who was getting its daily admiration dose while posing in an opened window. Then I headed to Gare de Lyon, at 5 minutes away, to take the metro which was suppose to take me to my next stop: Little Sri Lanka. 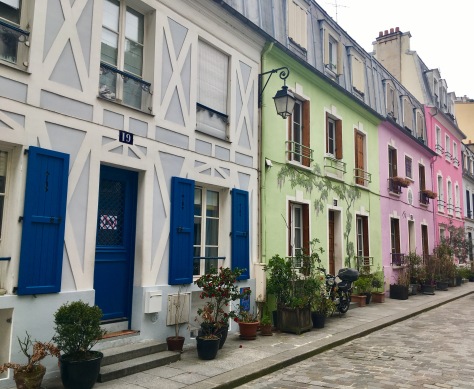 The top semi-secret and un-touristy Paris neighbourhood was anything but the fancy city of Paris I knew. The moment I went out from La Chapelle metro station, I was in a different city, on another continent. Shops selling Indian sarees, opulent dresses with large golden necklaces, stones, silk, all shinning and sparkling, right next to tinny shops with spices, old cell phones, accessories, indian food, there it was everything. From men with large moustaches and coloured turbans, eating rice with their hands in small and dark restaurants, to guys sitting in the corners of the streets doing I got no idea what, to women wearing proudly the red Bindi on their forehead. Now I believe those who say in Paris there are parts of it where you don’t feel as in Paris. Even though I did not feel unsafe, I was alert and I wouldn’t risk to walk those streets after dark.

I had one more stop to complete my wish of getting to know Paris better. The 3rd on my list was Belleville. Don’t judge it by the name cause it doesn’t reflect the beauty of the area, which looks more like any city getto, with old grey buildings where no one seemed to live, closed shops with empty windows, small fast foods with no clients and plenty of graffiti. Rue Denoyer is a masterpiece of street art though, with about 30m of walls completely covered in graffiti, with activism messages and photographers trying to get the best shoot of the place.

I was heading to my beloved Montmartre, thinking that it was enough of something else for one weekend, when, passing Jaures and Stalingrad stations I really saw from the train the streets and areas there, where, indeed, I wouldn’t wanna be not even during the day. Groups of young men gathered at the corners of the streets, people, probably migrants living in tents, others sleeping on the pavement. The contrast is striking compared to central fancy Paris.

Right in front of Abbesse I met my friend, who’s living in Paris and for the next 10 minutes he gave me a speech about how reckless I was to wander alone in those areas. Maybe I was, a little, but I always believed you can only feel a city on its streets, but not those packed with tourists.

2 thoughts on “Weekend in Paris: Not a lazy Sunday”